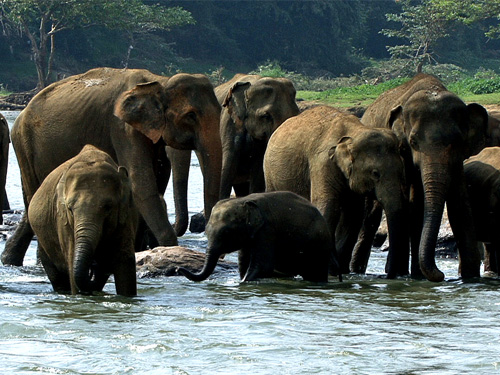 Elephant Orphanage is an unfamiliar terminology, but it’s absolutely true and real. The secluded premises dedicated to provide a natural habitat for captive elephant’s weeks old babies to fifty-year-old parents and grandparents. The herd can be sited in the orphanage-only place of its kind of this population on earth to date. The elephant orphanage in Pinnawala to witness the feeding to the baby elephants. The elephant orphanage is about 2 and half hours drive from the hotel IN Colombo or Negombo and good chance for a people to get up close and personal with the pachyderm.

Pinnawala Elephant Orphanage is an orphanage and breeding ground established in 1975 for abandoned elephants in Sri Lanka.  Currently its home to one of the largest elephant herds in captivity in the world with more than 85 elephants. Pinnawala was first established by Wild Life department Of Sri Lanka in 1975 on a 24- acre preserve near the town of Kegalle, halfway between Colombo, the commercial capital of Sri Lanka and Kandy. Its main purpose was to feed and provide care sanctuary to orphaned baby elephants that were found in wild. In 1978, the orphanage was taken over by the Department of National Zoological Gardens, and in 1982 breeding program was lunched.  The river the ‘Maha Oya’ by the side of the orphanage plays a vital role and enable the elephants to mix and choose their partners. The inmates of the orphanage were generally brought in their early ages, and they were victims of the confrontation either with the humans or the nature. Causes of nature are primarily due to desperate search for water, and muddy fields are traps for these innocent creatures.

Every activity of the Pinnawala elephant orphanage has been planned to a timetable. The baby elephants are bottle fed at 0915 a.m. The gates are opened for visitors at 8.30 a.m., while the elephants take the stride to the valley nearby and to the eastern side of the orphanage. They could settle to move about in freedom, as many enjoy the mud/dust bath. At around 10.00 a.m. the herd of elephants move to the river for a refreshing bath. The river – ‘Maha Oya’ – is the third largest river in Sri Lankan, in terms of volume of water carried to sea. By 1.15 p.m. baby elephants receive another dose of milk while grown-up elephants receive snake of pellets. At 2.00 p.m. the elephants proceed to the river and remain bathing until 4.00 p.m. After this refreshing dip they return to the sheds.

At this time elephants receive their routine feed of foliage comprised of Kitul Palm and trunk, Coconut palm and Jack tree including other varieties of plants of the big family.

The average quantity of food intake of a grown-up elephant is 300 kg of foliage and 200 liters of water daily. Baby elephants feed on formula II powdered milk 5.5 liters as a time to make total of 27.5 liters a day. They normally get 2-3 meals in the night depending on the age and size.

More orphans join the orphanage year by year the captive population grows and the breeding continues in the orphanage. The Pinnawala Orphanage has recorded sixteen elephant births. The birth statistics reveal that there was only one mortality stillbirth, within its 24 years of operation.

The river possesses the characteristics that provide an ideal bathing atmosphere to elephants. The rocky bottom of the river provides isolated swallow pools, where elephants dip to splash and bathe. The water level generally is 1/2-meter-high and the river provide continuous flow of water in the dry months – February, July and August except in November and June where the volume would fluctuate.

It is good idea to go and have your lunch by the river while bathing elephants.

ROUND TOUR AROUND SRI LANKA INCLUDING LIPTON SEAT