You are here: Home / Destinations / TRAIN JOURNEYS IN SRI LANKA 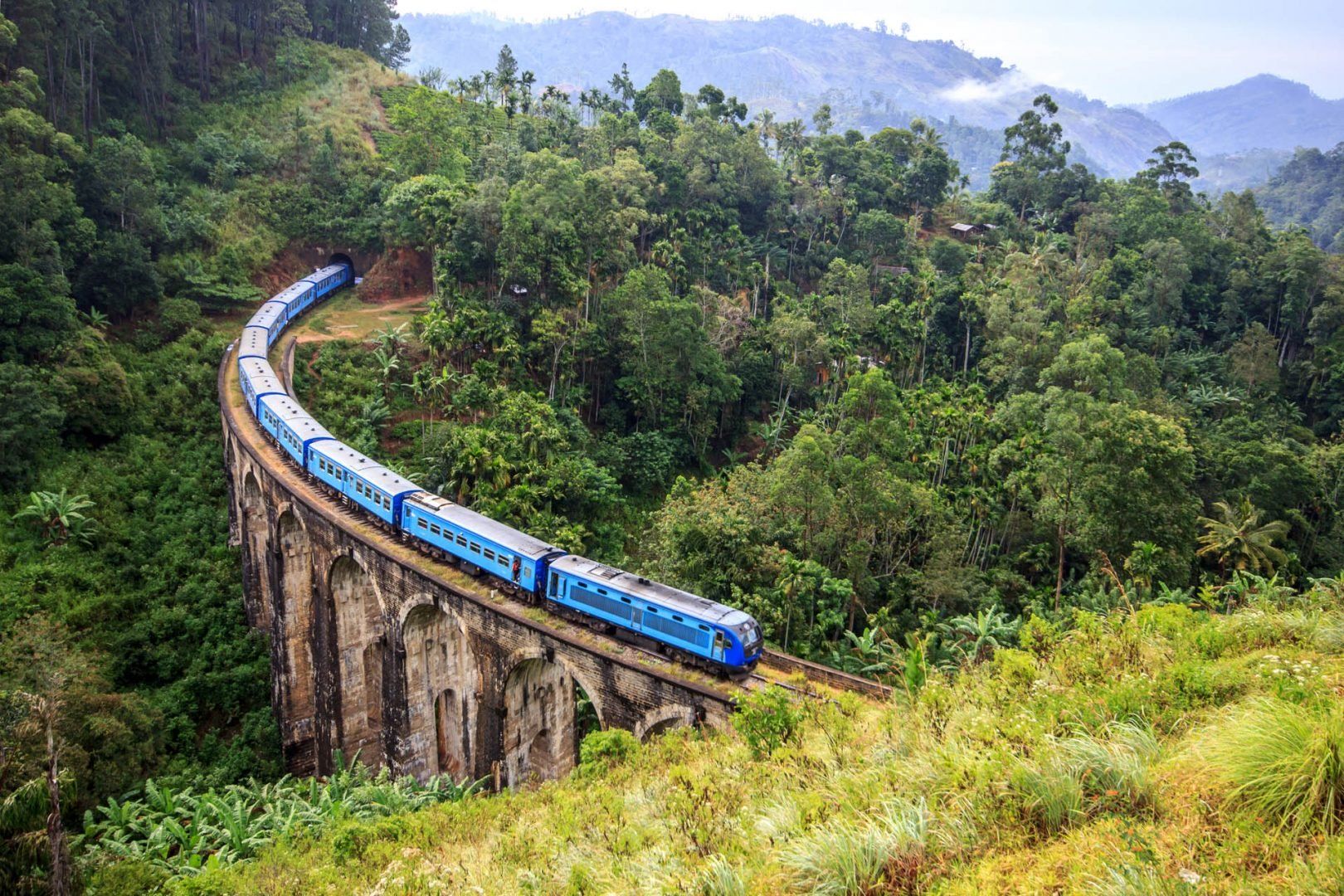 There are train rides, then there are Sri Lankan train rides. The teardrop island in the Laccadive Sea may be small, but it packs in some of the world’s most thrilling rail journeys. You could find yourself rattling past suburbs with a fellow commuter dozing on your shoulder or perhaps weaving in and out of emerald-green tea gardens and thickets of tropical rainforest while tucking into a packed-to-go meal of curry and rice; sometimes both in the same journey.

The steam trains that once transported tea and spices along these weaving rail lines have mostly vanished, but the colourful diesel locos that replaced them offer the same evocative transect through the Sri Lankan landscape. If you’re a lover of travel by locomotive, make sure you book tickets (in advance!) for one of these four epic train journeys around Sri Lanka.

The one rail journey that features on almost every Sri Lankan itinerary, the three-hour trip from Colombo to Kandy will whisk you away from the big city sprawl to the genteel greenery of Sri Lanka’s spiritual capital, home to the legendary Temple of the Sacred Tooth Relic, enshrining what’s claimed to be a genuine tooth of Buddha.

On the way, you’ll rattle past rolling hills, paddy fields, lush stands of tropical forest, palm trees waving like giant hands, and miniature village train stations with tin roofs and station attendants standing to attention in immaculate uniforms. You’ll also feel the air cool as you leave the baking coastal plain for the more pleasant climate of the hills.

The Colombo to Kandy line was the first major route established by the newly formed Ceylon Government Railway in the 1860s, slicing through the forested hills inland from the capital to bring tea and coffee down to the coast, to further the economic ambitions of the British Empire.

Today, travelers ride in the opposite direction, on a journey that serves as the perfect introduction to Sri Lankan train travel, and offers by far the most atmospheric and enjoyable way to reach the Hill Country from Colombo.

The journey from Kandy to Badulla takes seven to eight hours, and carves through Sri Lanka’s tea country, passing swirling, curling plantations that appear hollowed into the hilly green landscape like the enormous fingerprints of a giant. Tidy fringes of lemongrass and canna bushes provide an ornamental trim around the edges, while tea-pickers in rainbow saris create vivid flashes of colour amongst the emerald sea. To make the most of the views, stake out a vantage point in one of the open train doorways, with your feet dangling above the track.

The final stage from Ella to Badulla is perhaps the most dramatic section of the journey, with some spectacular feats of 19th-century engineering carrying the train across valleys and ravines and around problem outcrops.

Just north of Ella, the tracks curve over the brick-and-stone Nine Arch Bridge before tackling the Demodara Loop, where the line circles a hilltop and passes back under itself. Many travelers end the journey at Ella and hike to viewpoints around the bridge, for one of Sri Lanka’s most popular photo opportunities.

The Indian Ocean washes almost up to the rail tracks on the ride south from Colombo to the Portuguese-founded city of Galle, bringing fresh breezes and the smell of sea salt right into the carriages. So long as you sit on the right-hand side of the train, you’ll have views out over the ocean as the train clatters out of Colombo.

The rail line meets the shore just south of Galle Face Green, a large urban park on the outskirts of the capital, and follows it for almost the entire length of the journey. If the lure of the big blue gets too much, passengers can hop off the train at beachside towns including Moragalla (via Hettimulla station), with snorkeling opportunities amidst coral reefs, or Hikkaduwa, where surfers ride the swells and sip smoothies in shorefront cafes.

Whether you choose to temporarily alight or not, make sure you sample the wares of vendors who join the carriages at tiny rural stations. Grab some buttered sweetcorn, sliced fruit or packaged curry and rice and take in the bucolic scenes of coastal life – from children and dogs splashing in the surf to stilt fishermen sat atop their wooden perch – all the way to Galle.

The rail line to the far north of Sri Lanka was severed by fighting between southern Buddhists and Hindu Tamils during Sri Lanka’s long civil war. When the last Yal Devi Express rolled into Jaffna on 13 June 1990, it was marooned by bombing. Empty carriages were repurposed into military bunkers, tracks were ripped up for scrap metal and stations fell into ruin. For 25 years, rail travel to Sri Lanka’s Hindu north was a distant memory.

And then, in 2014, the shrill whistle of locomotives returned to the north as the Yal Devi Express rumbled back into Jaffna, on gleaming new tracks, for the first time in a generation. Today, the three-and-a-half-hour ride from the ancient Buddhist city at Anuradhapura to Jaffna offers a window onto a different Sri Lanka. You’ll leave the gleaming white dagobas (stupas) behind at Anuradhapura, and in their place multi-hued kovils (temples) start to colour the countryside as you steam into Sri Lanka’s Hindu north. You'll also leave behind Sri Lanka's major tourist crowds, with international visitors short on time skipping the splendours of the island's northern coast.

On the final approach to Jaffna, the landscape flattens out, and patches of water and saltpans appear as the train crosses Elephant Pass – the heavily militarized bottleneck guarding the entrance to the Jaffna peninsula. Tall palmyra palms rise over a landscape that still bears the scars of war, but also green shoots of rejuvenation, as villages and townships pick themselves up after decades of conflict. Waiting at the end is Jaffna itself, a vibrant Hindu city with a colonial heart – an easy leaping-off point for some of Sri Lanka’s most idyllic, unspoiled islands and beaches.