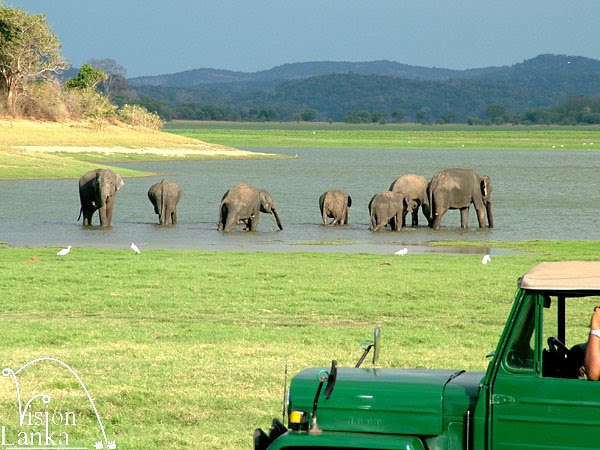 Minneriya National Park lies in the North and Central provinces of Sri Lanka, and although declared a protected Wildlife Sanctuary in 1938, was only given National Park status in 1997. It’s wide open spaces, combined with the Wasgamuwa and Flood Plains National Parks allow the elephants vast tracts of protected land to safely reside in. Minneriya has a huge manmade tank, or reservoir, which dates back to the 3rd Century A.D. and was built by King Mahasen. During the monsoon rains the tank fills up, and when it is dry season the water starts to deplete. Never empty, it is a source of water and a feeding area for huge numbers of birds, mammals and amphibians year round. Minneriya National Park that covers an area of 8,889 hectares is of tropical monsoon climate: annual rainfall is about 1146mm and mean annual temperature is 27.5 centigrade. The altitude ranges from100m to 885m at the top of Nilgala peak.
Mammals.
Among the 24 species of mammals resident in the park are Elephants, Leopards, Sloth Bear, Spotted Deer, Sambar Deer, Wild Buffalo, Wild Pig, Grey Langers, Purple-faced Leaf Monkey, three species of Mongoose, Porcupine & Indian Pangolin.
Birds
Minneriya National Park has recorded over 170 species of birds. From Migrating waders like Wood sand Piper, Common Sandpiper & Kentish Plovers to forest birds like Malabar-pied Hornbills, Rufus Woodpecker the globally endangered Lesser Adjutant and the endemics Sri Lanka Grey Horn-bill, Sri Lanka Green Pigeon, Brown-capped Babbler and Sri Lanka Jungle Fowl are some of the highlights.
Amphibians
Among the nine species of Amphibians at Minneriya National Park are the endemic and endangered Slender Wood Frog and the Common Tree Frog. Of the 25 species of reptiles recorded in the park 8 are endemic including the Red-lipped Lizard. Water and Land Monitors are also seen here. The Mugger Crocodile can be seen near the tank. Many species of fresh water fish are found in the Minneriya reservoir.
More spectacular than possibly any other wildlife event in Sri Lanka, is simply called ‘The Gathering’. During the dry season when the water in the tank starts to diminish, more and more animal congregate around the tank where the grasses are rich and fertile. For several months of this drought season different herds of wild elephants gather at the reservoir. They come from the outlaying areas beyond Minneriya, and at any one time it is possible to witness up to 300 elephants. They are not migrating, they simply ‘Gather’, to socialize, bathe, feed and possibly mate. To be an observer of the world’s largest gathering of wild elephants in the world is truly a memorable sight, and an unforgettable opportunity to watch the social dynamics of these great creatures. It is a unique phenomenon and only seen in Minneriya National Park. Recently, this amazing Gathering was listed as Number 6 in the Lonely Planet’s Guide to Natural Wildlife Spectacles of the World.
Minneriya National Park, Sri Lanka’s truly unique wildlife extravaganza.