Gal Vihara statues, ambitiously conceived and gloriously perfected according to the Oriental canons, on an abrupt boulder of dark granite about 27 meters in length and 10 meters in height at the centre and sloping towards the ends are still in perfect preservation with their irresistible charm and sublimity.
All four images hallowed out of the single massive slab, bringing to life serene facial expressions and graceful flow of the robes, are highly credible efforts to capture the boundless compassion and the infinite wisdom of Siddhartha Gauthama Buddha, the Tathagata (the one who came thus), the Omniscient. The ravages of time, rain, thunder and heat have done no harm upon the statues as if gods, the superior and resplendent beings in some other worlds have protected those for centuries.

Gal Vihara consists of four cave shrines having statues in the three postures in four cave shrines named Cave of Vijjadhara, Excavated Cave, Cave of Standing Image and Cave of Reclining Image. The sockets cut into the rock behind the statues testify that the walls had originally separated each four statue from one another. So do the ruins of the foundations of the brick walls separating the for caves.

Vijiadhdharaguha (Cave of Vijjadhara) houses a huge yet serene exquisitely carved seated Buddha statue in Dhyana Mudra framed by a Sanchi-style arch, with miniscule Bodhisattvas worshipping the supremely enlightened being from their celestial dwellings. The arch is decorated with the symbols of Mahayana symbols. The symbols include universal diamonds (Visvaraja), double lotus (Visvapadma) and the flame like symbol over the head of Buddha called Siraspata.

The Excavated Cave
The Excavated cave too houses an image of Buddha in Dhyana Mudra, yet smaller than the main image at Vijjadhara Cave. The rock-cut sedent image, 4 feet 7 inches high is seated on Padmasana (Sinhala: lotus pedestal) 3 ft high. On either side of the head of the statue are minuscule images of Brahma and Vishnu.

The Cave of Reclining Image
The space between the eyes measured one foot, the length of the nose 2 ft. 4 in., and the little finger of the hand under his head 2 feet. Now, you can guess the size of the figure: 46 feet (14 meters). In spite of the colossal proportions, the delicateness of the features are of supreme serenity and sublimity. The pillow is black rock granite yet the unknown sculptor has carved the statue of heroic propotions with such tenderness even the bolster like pillow has taken a slight depression under the head.

Cave of Standing Buddha Statue
The seven meter tall statue of supreme craftsmanship, with its eyes half-closed, arms folded, contours of the rock flowing over the face dreamily betrays a sorrowful expression. But then again, the supremely enlightened, the Omniscient, has transcended all sorrows. As such, the sorrowful expression could also be a puzzle. The elongated ears of the statue, the rightward curled clusters of hair, the Padmasana (Sinhala: double lotus pedestal) are unmistakable signs that make the scholars conclude the statue is that of Buddha himself and not of the disciple attendant Ananda, who still hadn't attained the arhathhood (Sinhala: supreme enlightenment, the state that leads to breaking free of the cycle of birth, death and rebirth upon the final extinction) grieving over the final extinction of his master.

The Reclining Image: posture of parinirvana final extinction or posture of reclining
Buddha's parinirvana (final extinction, rather than death, following the life in supreme enlightenment, braking free of the cycle of death and rebirth) seems to be indicated in part, by means of the higher foot which is slightly withdrawn: the pain caused by the last breath. Is it? Perhaps not. This posture coupled with the placing of the head resting of the right palm is called Simhaseyya (Sinhala: Lion-posture): the lion sleeps resting its head on its right paw. 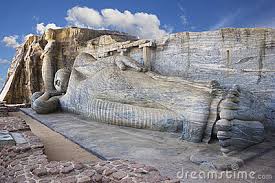 "  Dear Cyril, We are fortunate to have you as a friend here in Sri Lanka. You are extremly  Knowledgeable and more than ever - having an attitude of helpful nature and the willingness to solve issues on hand whilst on our tour around Sri Lanka. As I have said to you we will reccommend you to all our friends who wish to tour in Sri Lanka. My family Karen, Kalvin and Andre also liked your company and wish you and your family well. God bless you all and we will keep in touch, for sur..." Alwyn Santhumayor & family