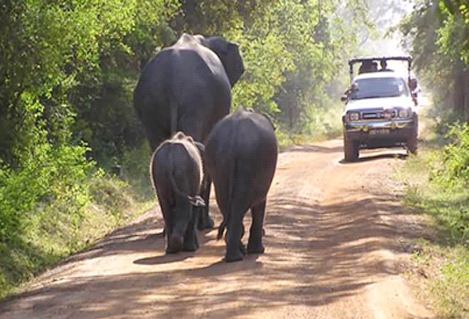 Yala national park (1570 sq.km) was created in 1938 and is in the south-eastern region of Sri Lanka and extends over two provinces of Hambantota district of southern province and Monaragala district in Uva province. The gateway to Yala National Park is Tissamaharama. A 20 km drive via Kirinda takes the visitors to the Palatupana. At Palatupana, the well-designed visitor centre provides the information to the tourists and try to assign a tracker to all incoming vehicles. Climate of Ruhuna National Park is usually hot and dry. The mean annual temperature is 27 Celsius, although in the dry season the temperature could go as high as 37 Celsius.

The best period to visit the park is from December through to March. April, May and June are rainy and the park is close in September.

Of all the National Parks in Sri Lanka, Yala National Park gives the best opportunity to witness Sri Lanka’s broad variety of wildlife: colorful painted stork in troops are seen perched at the shores of lagoon where the crocodiles to have chosen to doze off; lovely fan tailed peacocks in their resplendent blues and greens parade about amidst the woods where monkeys hang, leap and chatter; in the bush jungle are the Elephants; crossing the tracks and wandering off into the thorny scrub jungle is the star attraction of the park: the leopard.

Sri Lankan leopards (Panthera Pardus Kotiya) are said to be a distinct sub-species from their Indian neighbors. Leopards can be seen throughout the park. The Best period for enjoying the sights of leopards is during January to July. 120 leopards.

Yala National Park’s Block 1, on the western side of the park, the only one of all five blocks open to the visitors, has recorded the highest density of leopards among the leopard populations scattered in the wildlife parks of Sri Lanka. These magnificent beasts have now much habituated to the encroachment of their domains by the humans in jeeps. Young males don’t betray any sign of disturbance; they seem confident roaming over the gravel roads tracks as well as the bush jungle during the day: the visitors enjoy to no ends, fine photographic opportunities to capture the magnificent beasts well focused at the close range.

Yala is home to considerable population of elephants which varies seasonally, approximately 500 hundred elephants. Dry season of May to August is the best period to see elephants.

While you should also spot at least a couple of jungle fowl, a singularly inelegant, waddling creature, like a feral hen, which has been adopted as the national bird of Sri Lanka.

Notable reptiles are Mugger Crocodile, which is abundant in the abandoned tanks, Estuarine Crocodile, found in the main rivers, and Common monitor. Other reptiles include Cobra and Russel’s Viper. A variety of Sea Turtle, Olive Ridley and Leatherback, of which Yala coast line is a major nesting ground.

"Dear Cyril, Here are some photos for you as we promised, and also little gift to you. Here is some photos of elephant boy which we were took on elephant ride. Please give to them when you go to Habarana again. We are very grateful to you for your services that you have done to make our holiday in this beautiful country. Still we are thinking over our nice trip with you. It was fantastic, really! Here in Holland, life is normal again. Greeting for your wife and daughter too. George and Cala ..." George and Cala

"We found Cyril on-line and after checking with lots of other guides we decided he is the one for us, that decision was the best one we did for our trip From the beginning, in our emails, Cyril listen to us and was very helpful, he gave us information and helped us to create the best trip for us.We had 10 days trip, for our honeymoon, to many parts of Sri-Lanka. the country is amazing, green, nice people and good food.Cyril was a great driver and even greater guide, he has so much knowledge and e..." Coral and Oded from Israel