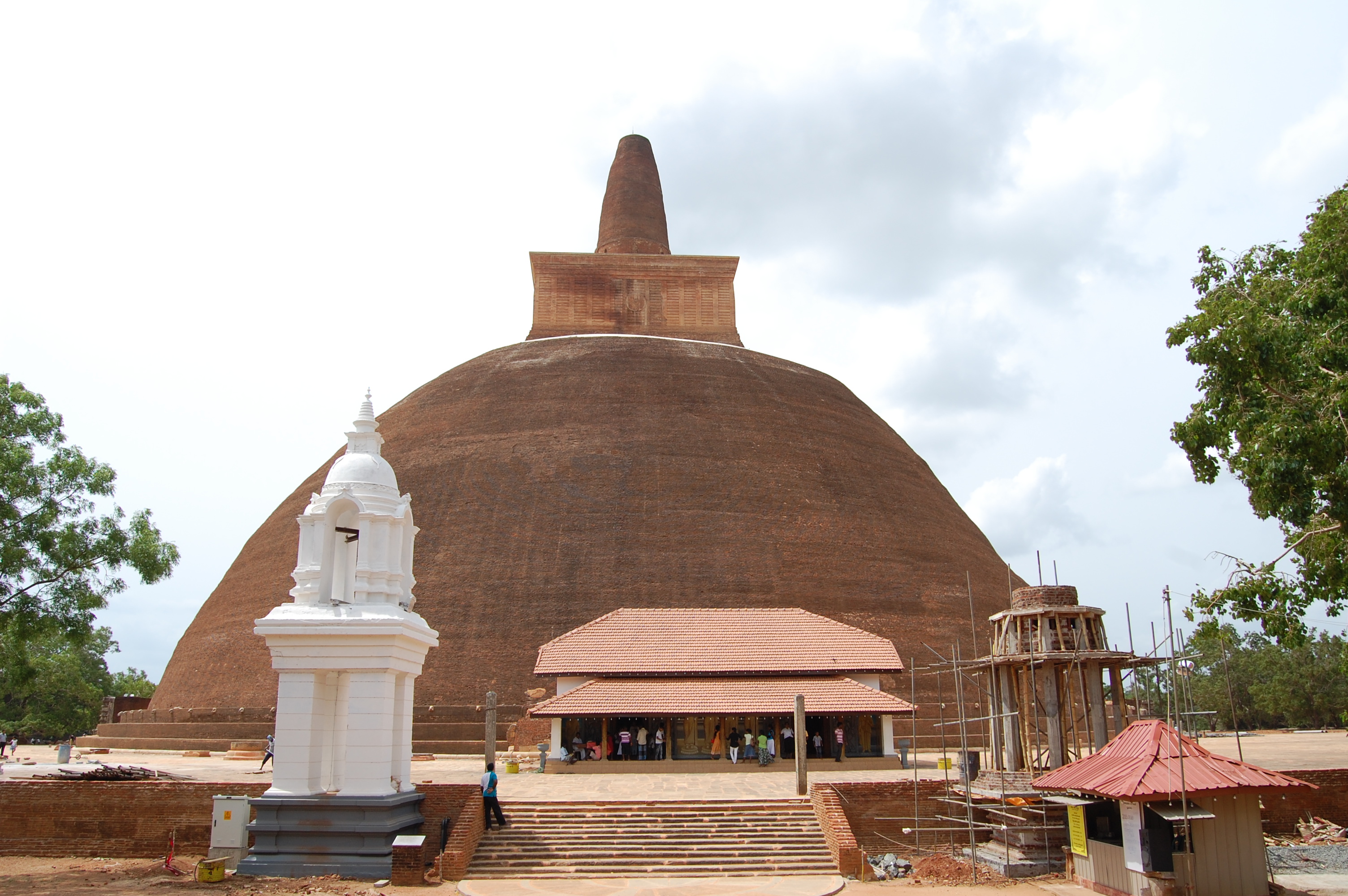 Abhayagiri Vihara is one of the most extensive ruins in the world and one of the most sacred Buddhist pilgrimage cities in the nation. Abhayagiriya Stupa. Made by king Valagambahu (89-77 BC). Forth Son of King Saddathissa. Built in 1st century BC it stands at 74.98 metres to the tip of the damaged spire It is the second largest stupa in the island today. According to the 5th century traveler Chinese monk Fa-Hsien's descriptions, this stupa has been 400 feet (122 metres) in height and has been decorated with gold and silver and studded with all kinds of jewels.  Historically it was a great monastic centre as well as a royal capital, with magnificent monasteries rising to many stories, roofed with gilt bronze or tiles of burnt clay glazed in brilliant colors. To the north of the city, encircled by great walls and containing elaborate bathing ponds, carved balustrades and moonstones, stood "Abhayagiri", one of seventeen such religious units in Anuradhapura and the largest of its five major viharas. One of the focal points of the complex is an ancient stupa, the Abhayagiri Dagaba. Surrounding the humped dagaba, Abhayagiri Vihara was a seat of the Northern Monastery, or Uttara Vihara.

The term "Abhayagiri Vihara" means not only a complex of monastic buildings, but also a fraternity of Buddhist monks, or Sangha, which maintains its own historical records, traditions and way of life. Founded in the 2nd century BC, it had grown into an international institution by the 1st century AD, attracting scholars from all over the world and encompassing all shades of Buddhist philosophy. Its influence can be traced to other parts of the world, through branches established elsewhere. Thus, the Abhayagiri Vihara developed as a great institution vis-à-vis the Maha Vihara and the Jethavana Buddhist monastic sects in the ancient Sri Lankan capital of Anuradhapura.

King Valagamba and Abhayagiri - It is recorded in the chronicles that Abhayagiri Dagaba was established by King Valagamba during the period of his second reign, from 89-77 BC. A young Brahmin named Tiya (Tissa) declared war against him. Tiya was deluded by the prophecy of another Brahmin that was destined to be king. Before the arrival of Bhikkhu Mahinda, who brought Buddhism to the island, Brahmins held the highest place in society. After the establishment of the Buddhist Sangha on the island, however, they lost their supremacy, and were replaced by the Sangha. Some Brahmins converted to Buddhism, while others revolted Tiya, who enjoyed the support of his community, lived both in and outside of Sri Lanka, and was therefore very powerful.

At the same time, seven Tamil chiefs landed at Maha tittha with a mighty army. Valagamba, a good diplomat, realized that his forces were too weak to fight against both of these enemies and tried to rid himself of them by making them fight each other "like a palm leaf cutting itself".  He sent a message to Tiya that he could have the kingdom, provided he managed to defeat the foreign invaders. Tiya agreed, advanced with his forces to meet the Tamils, and was vanquished by them. The Tamils, elated by their success, advanced towards Anuradhapura and defeated the King, who was forced to abandon the throne and go into hiding in the mountains. As the King, defeated in battle, was fleeing Anuradhapura, a Jain priest of Giri Monastery, which had been built by King Pandukhabaya near the northern gate of the city, cried out: "The great black Sinhala is fleeing." The king thereupon resolved "if my wish (of regaining the kingdom) is fulfilled, I will build a Temple here."

During the Beminitiya Seya or period of famine and foreign rule which followed, Vattagamani Abhaya took refuge in the mountain region amassing troops until, after more than fourteen years of exile, he marched on Anuradhapura in 89 BC and defeated the last Tamil king, Bhatiya. In fulfillment of the vow made on the day of his defeat, one of his first acts was to build the Abhayagiri Vihara on the site of the Giri monastery. Mahatissa Thera of Kupikkala was appointed its Chief Incumbent as a mark of gratitude for his support in the fight against the invaders. Abhayagiri thereafter became a symbol not only of religious, but also of national, resurgence as it signaled the end of Brahmin and Jain influence in the country.

According to the chronicles, the name Abhayagiri Vihara originated from the names of King Vattagamani Abhaya and of the Giri priests who lived in the Jain monastery. However, since most ancient monasteries were built around a hillock or giri in Sinhala, (for example the Vessagiri, Meghagiri or Chetiyagiri monasteries) it is possible that the name Abhayagiri symbolizes the monastery created by Vattagamani Abhaya after his recapture of the kingdom surrounding the hillock known as Diga pasana, now inside the Abhayagiriya complex.

"We had a trip planned with Cyril just when international travel closed down due to Covid. Cyril was great in planning a trip with me that had a great deal of flexibility and tailored to visit the places we wanted to seeUnfortunately we were unable to take the trip. Cyril's response to that was great, he dealt with everything for us in terms of cancellationsHe has kept in touch with us since then and has already contacted me with a revised plan for our trip to Sri Lanka. Which we will book with h..." Brian O: Keefe - Perth - Australia