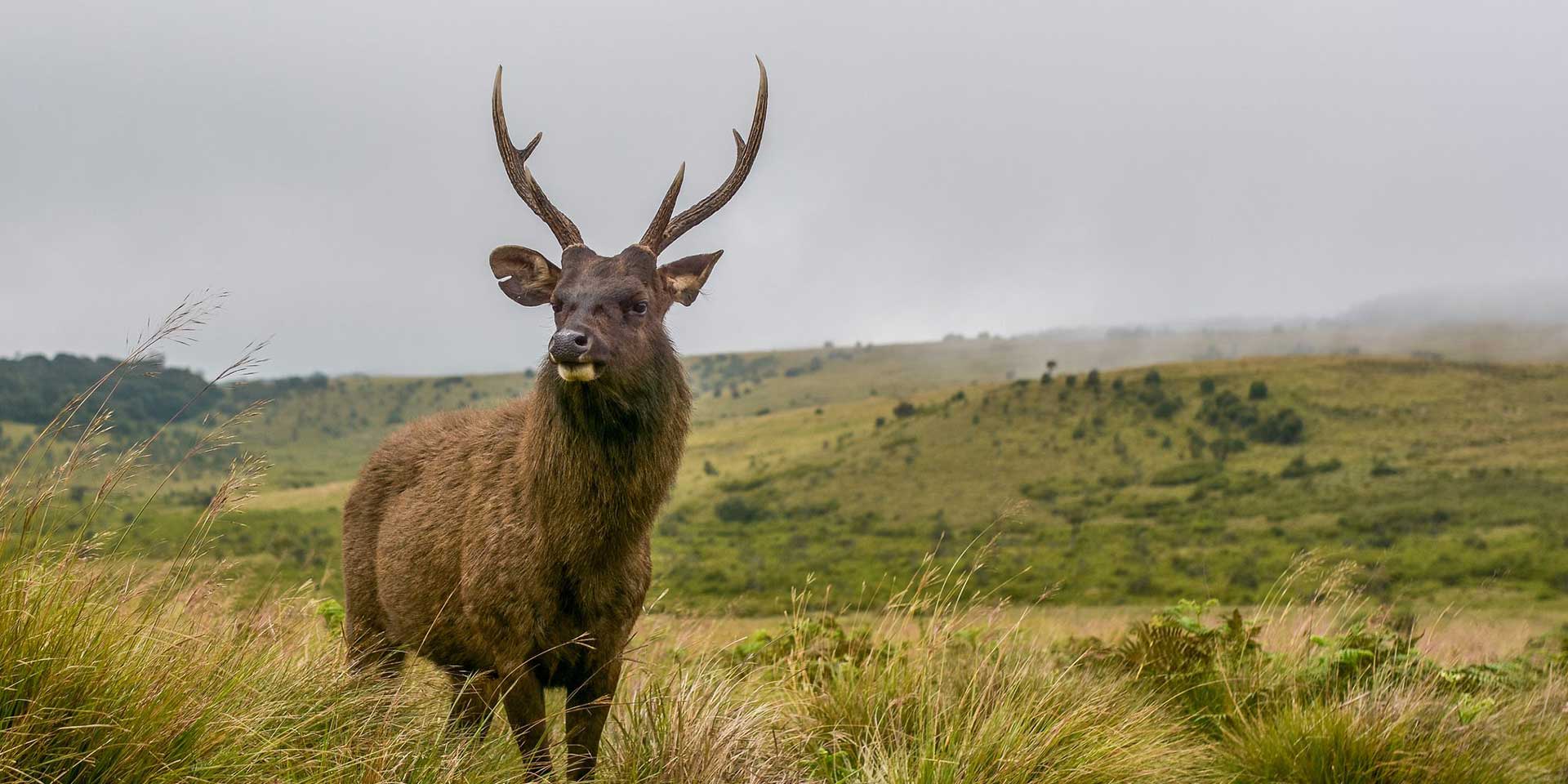 The great plains of the Central Highlands of Sri Lanka were discovered by the planter Thomas Farr in the early 19th century. In 1834 it was named Horton Plains in honor of then Governor of Ceylon (1831-1837) Sir Robert Wilmot Horton. In the year 1969, Horton Plains was declared a nature reserve. In 1988, the reserve was elevated to the status of a National Park. Horton Plains in Sri Lanka, is the coldest and windiest location in the country. It consists of ecosystems such as Montane evergreen forests, grasslands, marshy lands and aquatic ecosystem. At an altitude of 2,100 meters (7,200 feet) above sea level, and is located 32km from Nuwara Eliya via Ambewela and Pattipola road. Horton Plains is spread over the southern ridge of the central highlands in between Nuwara Eliya and Haputale. The tourists approaching Horton Plains from Nuwara Eliya find an entrance point at Pattipola while those approaching from Haputale find an entrance point at Ohiya. Three kilometers drive from either entrance leads to the newly built visitors center. Visitors center exhibits interesting displays on the history of flora and fauna of Horton Plains. Horton Plains was made a Nature Reserve in 1969 and upgraded as a National Park in 1988 due to its unique watershed and bio-diversity values. Its flora has a high level of endemism, and its undulating hills are covered with diverse wet low evergreen forest with large trees growing flattened to the ground on the high windswept slopes. Horton Plains harbours 52 species of resident birds and 11 species of migrant birds. More than 2,000 to 3,000 sambhur dear, monkey, leopard, barking deer, giant squirrel, fishing cat, wild boar and hare roam the forests and grasslands but are seldom seen except for the Sambhur, which comes out onto the plains to feed in the early morning and late evening hours. Baker’s fall, named after the British hunter and explorer Samuel Baker should also be visited when at Horton Plains. This is the only National Park where visitors can walk without a game warden along designated trail. Horton Plains spreads across over 3,169 hectares of the highest tableland of the island. In view of the large number of endemic flora and fauna species, Horton Plains was declared a UNESCO World Heritage Site on 30th July 2010.

World’s End is a frightening escarpment offering stunning views of the lowlands and is located at the edge of Horton Plains. World’s End has a vertical drop of about 1,000 feet and continues to drop a little less steeply for another 4,000 feet. For best viewing conditions get there before 10am to be able see the silver rim of the Indian Ocean to the South as mist tends to obscure vision after that.

The Climate of Horton Plains is that of a wet Montane forest. The average annual temperature of 14-16⁰ Centigrade while the humidity is relatively low at 65%. Though annual rainfall of the highlands is about 2540mm, Horton Plains records over 5000 mm of rainfall annually.

During the dry season, the temperature drops to around 5⁰ Centigrade in the day time. Swept with strong gale force winds at times, over-night frost is fairly common.

The gently rolling plateau of Horton Plains at the southern end of the central Montane massif of Sri Lanka is interspersed with network of streams and channels. The Montane forest is also the source of three major rivers of Sri Lanka: River Mahaweli-the longest river of Sri Lanka, River Walave and River Kelani. Still more, Horton Plains is bounded by the country’s second and third highest mountain peaks of Sri Lanka: Mount Kirigalpotta Kanda (2389 m) and Mount Thotupola Kanda (2357 m).

The most frequent site of wildlife at Horton Plains are herds of Sambar Deer. Among the other mammals in the park are Strip-necked Mongoose, Long-tailed Giant Squirrel Wild Boar, the endemic Bear Monkey and Toque Monkey, Fishing cat, Otter and

Now the Horton Plains has become a happy field of herds of Sambar Deer. However, the growth population of Sambar Deer has resulted in the increase of number of Leopards. Wild Boar, the endemic Bear Monkey and Toque Monkey, Slender Loris, Fishing cat, Otter, Barking deer, Strip-necked Mongoose, Long-tailed Giant Squirrel are some of the other mammals found here.

Until a century ago, Horton Plains was rich with Elephants. Then the whole population was hunted down to extinction by the British colonialists in Sri Lanka then called Ceylon. Today Horton Plains is the only national park in Sri Lanka where elephants aren’t seen at all.

Best time to visit Horton place is November to March. But through out the year can visit except heavy rainy day.